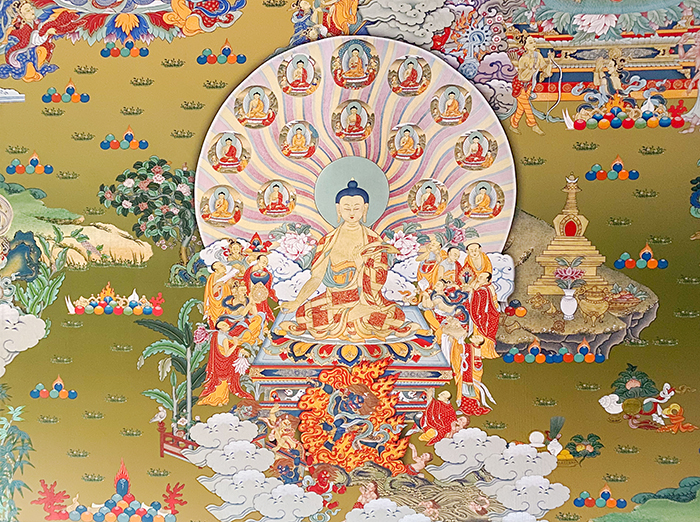 According to the most widely known life story of Siddhartha Gautama, he lived in Lumbini (modern-day Nepal) in the 6th century B.C. His father, the king of the Shakya clan, received a prophecy about the newly-born prince that he would become either a great king or a great spiritual teacher. Gautama’s father wanted his son to become a political leader and protected him from witnessing any human suffering and from all spiritual knowledge, surrounding him with various pleasures. According to the custom, the prince married at the age of 16, but his secluded life continued until he ventured out from his palace in his late twenties. It was the first time he was confronted with the realities of the human life. Outside of the palace walls Gautama saw a very old man, a diseased man, a corpse and an ascetic. He asked the charioteer about these people and the charioteer explained that all people get ill, grow old and eventually die, but some people renounce the world to seek the spiritual truth. Siddhartha who was 29 decided to leave his palace, his kingdom, his wife and son to find a path to the liberation. He chose the ascetic path and for the next six years he was studying the religious books, practicing meditation and begging in the streets. He realized that the austerity does not lead to liberation. Thus Siddhartha discovered the Middle Way — a path of moderation between asceticism and self-indulgence.
Being in Bodh Gaya, India, Gautama sat under the Bodhi tree and vowed never to leave this place until the enlightenment. After the 49 days of meditation he became the Buddha which means «an enlightened one».

After his enlightenment, Buddha had a large following and was giving teachings that constituted the foundations of Buddhism. Three major series of Buddha’s teachings are called «Three Turnings of the Wheel of Dharma». «Turning the wheel» is a metaphorical expression meaning «bringing about a new knowledge». To ’turn the wheel of Dharma’ means to teach the Dharma.

The second turning took place on Vulture’s Peak Mountain near Rajagriha. The new knowledge consisted of the teachings on emptiness (Shunyata or selflessness). The key sutra in the teaching of the knowledge of emptiness is the Prajñāpāramitā hridaya sutra or the Heart Sutra. Also known as ‘The Twenty-Five Verses on the Perfection of Wisdom ’, this sutra is the most prominent text of the Prajnaparamita collection.

The third turning took place in Vaishali, Bihar. The key sutra of this series of teachings is the Lankavatara Sutra. The third turning reveals the Buddha’s nature or the potential to become enlightened inherent in every sentient being.