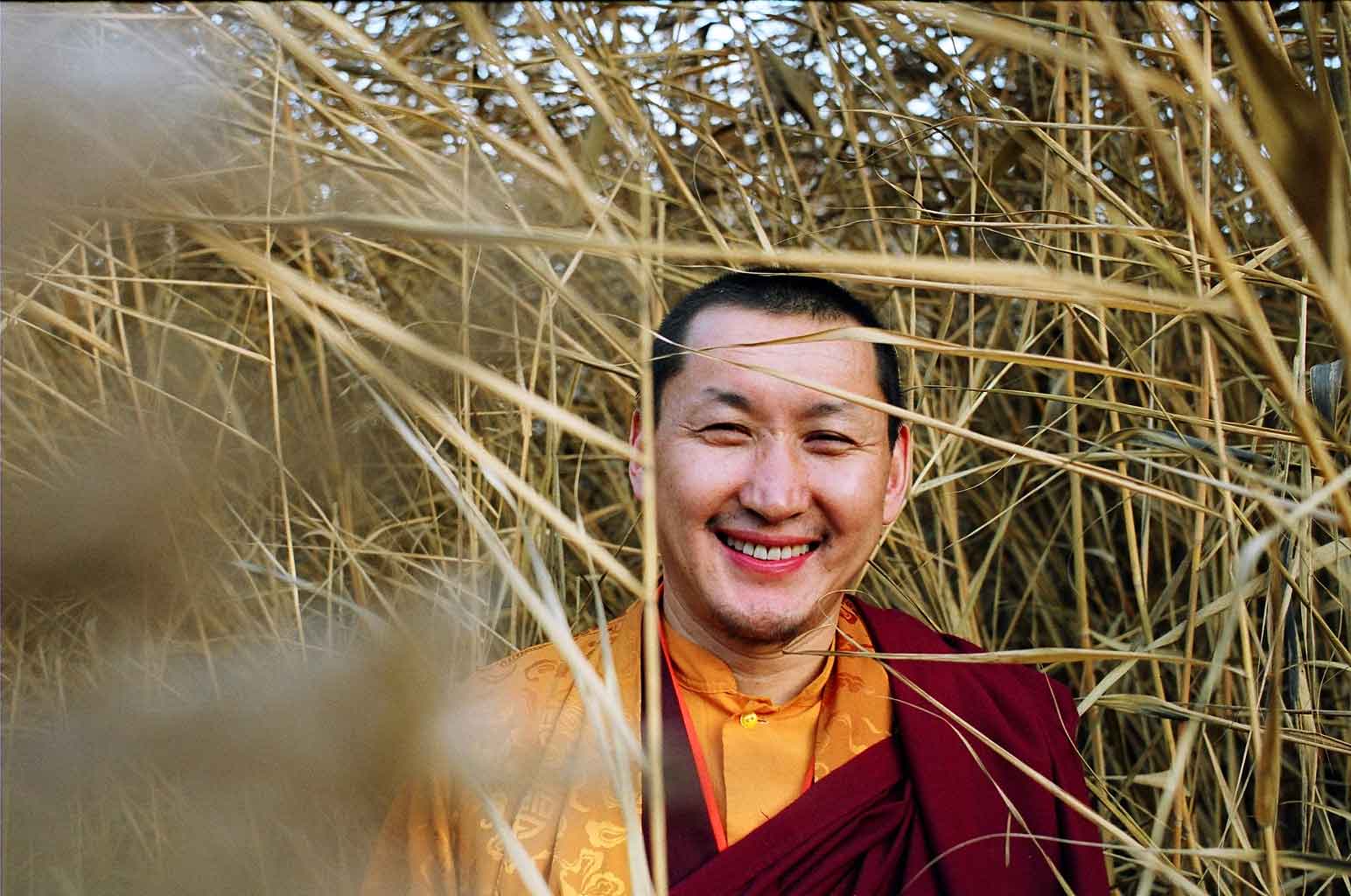 In the sublime country of Tibet the precious teachings of the peerless Buddha - the path of the three trainings and the erudition of the three baskets - scripture and realization, are explained, listened to, meditated upon and practiced within the eight great vehicles, the practice lineages. Their famed root and origin is the glorious great secret ancient translation lineage, the celebrity of which is widely proclaimed by six great monasteries, one of which, in Kham is the seat of the greatly realized Dzogchenpa, where incredible beings have held, preserved and spread the teachings, and from where comes Ranyak Patrul Pema Trinley Shedrup Nyima Rinpoche. That which follows is a brief account of his successive incarnations as well as his own biography. 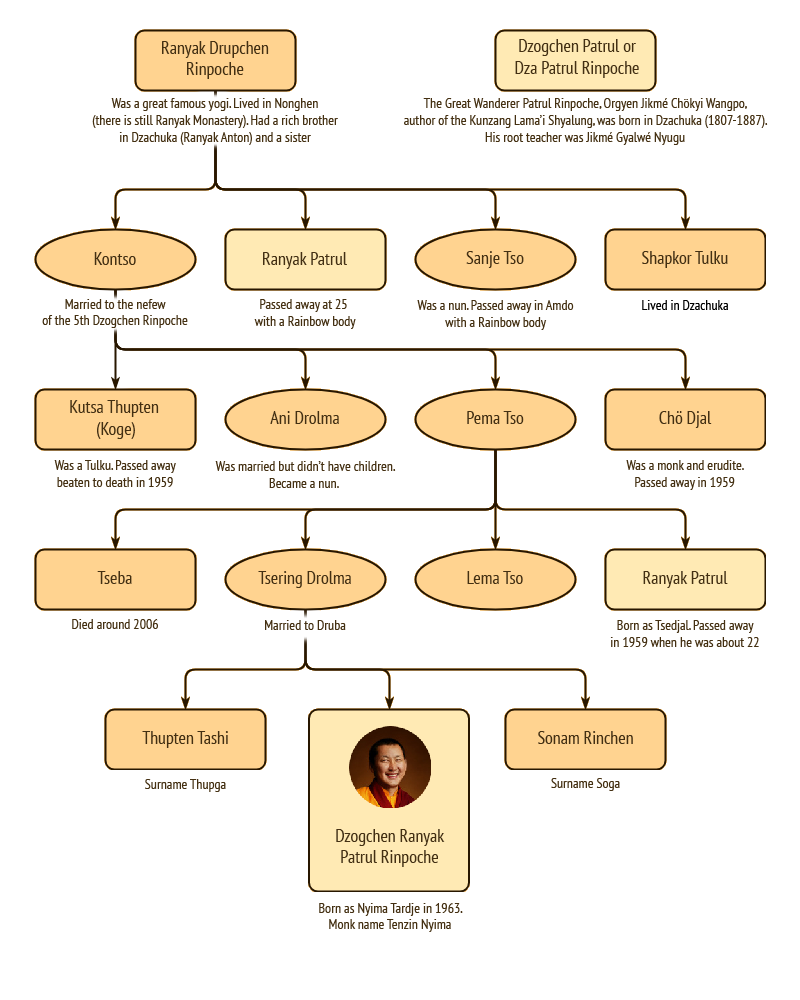 The first incarnation was born in the Dzajut region of Kham. His father, Ranyak Gyalse, who was also known as Ranyak Drupchen Rinpoche, lived the life of the highest of enlightened beings. It is mentioned, for instance, in the biography of Do Khyentse Sheewi Yeshe Dorje that when the latter went to Dzagyal Dorje Phenchuk, he met there a dark-skinned man who wore a conch-shell for an earring. They placed a boulder between them and amused themselves by parrying it with their swords and slicing it as if it were butter. Apparently, it can still be seen to this day. He would also kill animals, take their meat and, once sewn up again, tap them on their heads with his pipe. They would become just as they had been before, unwounded, and he would set them on their way. Ranyak Patrul Rinpoche was born then as a son to such a being.

The fifth Dzogchen Rinpoche, Thupten Chökyi Dorje, declared him without a doubt to be the reincarnation of Dza Palge, also known as Dzogchen Patrul Rinpoche [Orgyen Jigme Chökyi Wangpo], and installed him on a fearless lion throne. This great being, endowed with limitless, incomparable qualities, with erudition, realization and great merit, enjoyed complete mastery. At the age of twenty-five following some minor incidents, and leaving behind only his hair and nails, his enlightened mind went into the sphere of ultimate reality. The ceremonies which followed his passing away were excellently conducted by his nephew, Thupten, and by Shakor Tulku among others.

The second incarnation was born in the vicinity of Lake Kokonor to Pema Tsoshit, the niece of the fifth Dzogchen Rinpoche, Thupten Chökyi Dorje. Jigtral Shongchup Dorje recognized him without a shadow of doubt and enthroned him as the next incarnation. Even at a young age he was as incredible being; his mindstream completely enriched with the qualities of learning, purity and goodness. However, times had changed, and as his enlightened mind had turned elsewhere, he passed away without experiencing even the slightest illness.

The present incarnation was born in 1963 in eastern Tibet, close to Rutam Orgyen Samten Chöling in the centre of Kham. His father is called Drupa and his mother, from the family of the preceding incarnation, Tsedrön. From an early age he was endowed with limitless pure qualities such as faith and devotion, love and compassion, peace and discipline. His father had only to use symbols and games when he taught him to read, write and so on, as he learned quickly without having to force himself or make any particular effort. The people of the district, as well as his own family, were amazed.

When the preceding incarnation´s enlightened mind was going towards the sphere of peace, he said to his future mother `None of you should grieve. We will meet each other again soon.´. Although his family was sure that he would come again once he had made this testament, they feared that the new incarnation would meet with adversities similar to the great obstacles to the lives of the former incarnations, and so they hid him.It was only later that he entered the door of the Dharma at Rutam Orgyen Samten Chöling and studied and practiced the rituals of the four enlightened activities from the tantras of the secret mantra, in the pure ancient tradition of that great place. Amongst the red-and-yellow-clad star-like assembly, he, like the sun and moon, was truly superior. His learning and intelligence were pre-eminent. There was nothing in the training of the monastery, such as chanting, torma making and mudra, that he did not know, and he even excelled at mask-making and fine art.

When the monastery was being reconstructed he very respectfully rendered remarkable service by drawing, painting and making masks. It is well-known that the umdzes (leaders of chant) and chöpöns (temple attendants) of this monastery are beyond comparison, and yet when he was still very young he was assigned to the position of chöchen, or great chöpön, in which he trained many students up to his own level.Well before he was given the crown of the title of tulku, all the people of the district as well as of the monastery praised him and took him for an example. When they met him on the road, old men and women would take off their hats and join their hands. Just by seeing him they would get goose pimples and moved by faith, their minds would be drawn to the Dharma. It became clear that he was of noble birth, one of the Enlightened.He then entered the Dharma university, Dzogchen Shri Singha, cradle of the learned from the Land of Snows, where the gift of authentic Dharma - from the practices of the three bases of discipline up to the unsurpassable tantras - is endlessly bestowed according to the capacities and wishes of each student. While staying in that special place for a few years, he listened to and reflected upon the great Indian commentaries, and in that way, clarified his doubts; through meditation he gained experience; and through the precious training in discipline he tamed his mindstream.

He inclined himself at the feet of a great many spiritual friends such as Khenchen Dechen Namdröl, an emanation of Drupthop Thongtong Gyalpo, Khenchen Dawe Wöser, Khenchen Shongchup Sempal Pema Tseong Lhundrup and the supreme refuge Shapchoke Pema Kalzong Rinpoche. He was never seen to make great intellectual effort when he listened to the teachings. He was endowed with perfect innate wisdom and reached the height of learning in both Buddhist and non-Buddhist philosophies.

In a similar way, when the monastery was being rebuilt, for instance,he showed great respect and reverence in the way he helped. Without being discouraged by the rigours of the four seasons, he worked with great energy day and night like someone who is hungry and who sees food and drink. His activity was equal to that of the Bodhisattvas, who accomplish their own and others´ benefit.

Then, because he had other things to do for the development of his enlightened activity, and because it is in the nature of the Victorious Ones, he went to the Land of the Noble [India]. There in the foreign residence of Drupong Dzogchen he filled the role of Khenpo (abbot and master of studies) for four years and continually dispensed the nectar of the three vehicles of Dharma to many thousands of lay and ordained men and women. It was also while he was there that he founded a Dharma Centre of the Nyingthik Diamond Vehicle. At that time Choktrul Sogyal Rinpoche offered him the title of supreme Dorje Lopön (master of ritual), and repeatedly requested that he remain for a long time in that external seat of Dzogchen Monastery.

Also at that time, the true master of the ocean of teachings of the ancient translations whose face is no different from that of great Kuntuzongpo, the master of our lineage whose name it is difficult for me to pronounce, but whom I have reason to name here, Minling Trichen Gyurme Kunzong Ongyal, the glorious and good, of infallible and immutable speech, announced that he had discovered a truly- emanated young moon as a protector for the assembly of disciples. Furthermore, the wish-fulfilling jewel, the supreme refuge, Shapchoke Dzogchen, also announced that he was the true reincarnation of the former tulku, and offered him the crown title of holder of the teachings of Drupe Ongshuk Gyalwa Dzogchenpa.

So it is that at this time and in this world wherever the sun rises and sets, this learned, pure and good being, this precious supreme tulku, dispenses the nectar of the very profound Dharma to innumerable extremely fortunate beings of different races and tongues, according to their capacities and wishes. In this way he lives, and remains in good health.

Glorious protector of beings, of those from the exquisitely beautiful,
Perfectly snow-ringed field and of all others without exception,
Ranyak Patrul, enlightened supreme tulku,
May the bases of your life be forever deep and firm.

Once those who not being able to stand
The flow of your vast activity and harm you
Have been pacified, without effort and quite spontaneously
May the wishes of your incomparable heart be fully realized.

As the peerless and greatly bounteous true lama
Is the only origin of the Virtuous Ones of the ten directions,
So this brief biography about enlightened activity
Is part of the cause that leads to Great Bliss.

This error-free and completely honest biography was written with respect by Gyurme Ngödrup Darjee, more commonly known as Dzogchen Drakpa , a miserable student of the great monastery Pal Oming Orgyen Mindrolling, on the fourteenth day of the third Tibetan month in the year of the earth hare, the seventeenth rapgyen (sixty-year cycle), 29th April 1999. May everything be auspicious, auspicious.

May the most excellently virtuous
study and practice of Dzogchen Monastery,
origin of the teachings of the Victorious Ones,
spread in the fields of the ten directions;
May its enlightened activity shine brightly; and
May the appearances of the beings of this world
be brought under its control